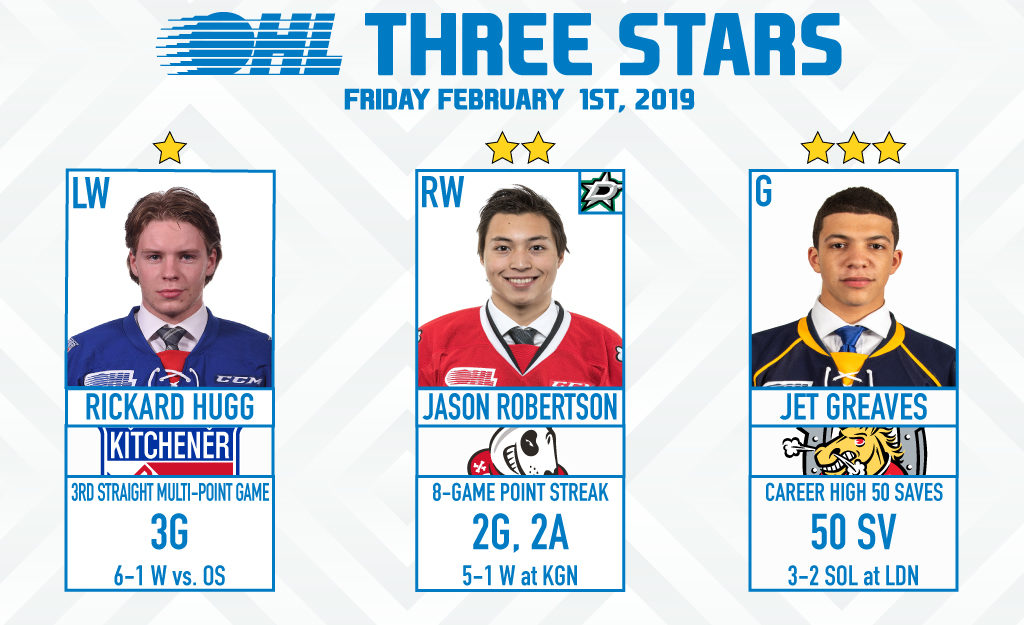 1ST STAR: RICKARD HUGG (KITCHENER RANGERS):
Rickard Hugg stepped up with his second hat-trick of the season as the Kitchener Rangers earned a third straight win, defeating visiting Owen Sound 6-1. Hugg had help on all three goals from linemate Riley Damiani who collected his second straight four point game with a goal and three assists. Hugg, who was appointed as Kitchener’s captain earlier this week, has multi-point outputs in six of his last seven games, contributing to a total of 53 points (22-31–53) through 42 games this season. The 19-year-old from Hudiksvall, Sweden recently represented his country at the 2019 IIHF World Junior Hockey Championship in Vancouver, BC.
• GAME HIGHLIGHTS

2ND STAR: JASON ROBERTSON (NIAGARA ICEDOGS):
Dallas Stars prospect Jason Robertson made his valiant return to Kingston on Friday, recording two goals and two assists as the Niagara IceDogs took a 5-1 road win. Robertson’s tenth 4+ point game of the season saw the IceDogs claim their seventh straight win as he has put together 82 points (37-45–82) over 43 games between Niagara and Kingston on the campaign. Robertson is currently riding an eight game point streak. The 19-year-old native of Northville, Mich. recently represented won silver with the United States at the 2019 IIHF World Junior Hockey Championship. He was Dallas’ second round pick in 2017.
• GAME HIGHLIGHTS

3RD STAR: JET GREAVES (BARRIE COLTS):
Rookie netminder Jet Greaves turned aside a career high 50 saves, helping the Barrie Colts earn a point on the road in London. Greaves turned aside 50 of the 52 shots he faced before stopping two of the three London shooters he faced in a shootout. The 17-year-old from Cambridge, Ont. was the difference for his club as the Colts were outshot 52-26. Greaves carries a 4-6-1-1 record with a 2.95 goals-against average and .918 save percentage through 15 games this season. He was Barrie’s third round pick in the 2017 OHL Priority Selection from the Cambridge Hawks Minor Midgets.
• GAME HIGHLIGHTS