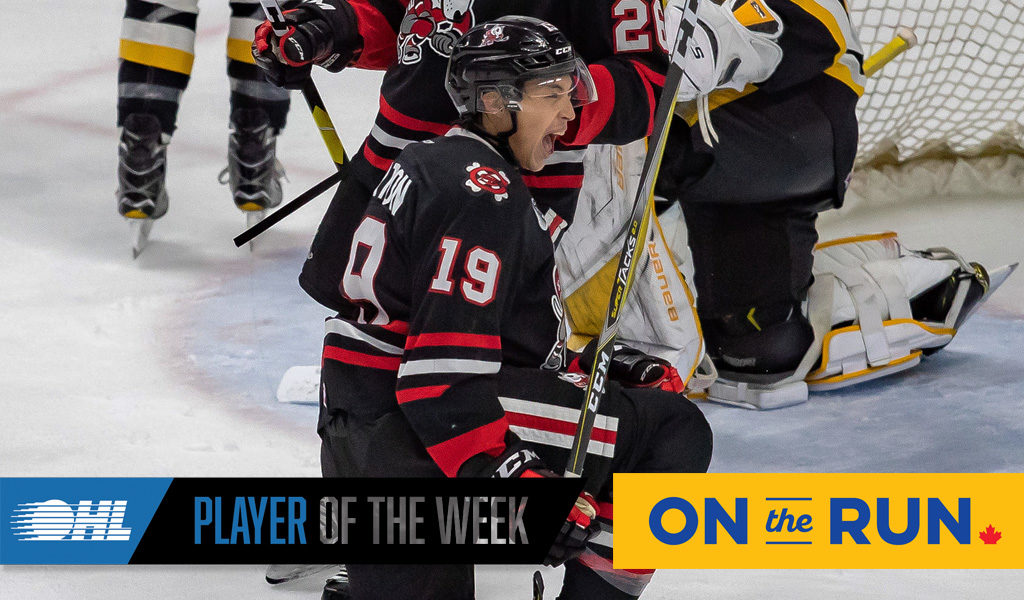 Toronto, ON – The Ontario Hockey League today announced that Dallas Stars prospect Jason Robertson of the Niagara IceDogs is the OHL ‘On the Run’ Player of the Week for the final week of regular season action ending March 17 with 11 points in three games including five goals and six assists with a plus-minus rating of plus-7.

Robertson delivered a trio of multi-point performances that not only clinched the OHL scoring title but helped the IceDogs win all three games to secure the Central Division crown and second place in the Eastern Conference standings with a final regular season record of 44-17-7-0.  On Thursday night Robertson contributed to every IceDogs goal scoring twice with two assists as first star of a 4-2 win over the Mississauga Steelheads.  He produced the same stat line on Saturday night as second star of a 7-4 road win against the Barrie Colts with his efforts helping teammates Ben Jones and Akil Thomas join him in the OHL’s 100-point club.  Robertson finished the season on Sunday afternoon in North Bay scoring once with two assists and first star honours in the 8-3 victory over the Battalion in what turned out to be a first round playoff preview.  The IceDogs have now won six straight games and will begin their best-of-seven series against the Battalion on Thursday night in St. Catharines.

The @OHLIceDogs forward and @DallasStars prospect is officially the #OHL’s Top Scorer finishing 2018-19 with 1️⃣1️⃣7️⃣ points including 4️⃣8️⃣? pic.twitter.com/unYeZzMmau

A 19-year-old from Northville, Michigan, Robertson becomes the league’s first three-time recipient of the weekly award.  While he was recognized once as a member of the Kingston Frontenacs, this still marks the fifth time it was earned by an IceDogs player.  The second round pick of the Stars in the 2017 NHL Draft finishes the season with a league leading 117 points from 48 goals and 69 assists in 62 games and was part of an IceDogs offence that led the entire OHL with 326 goals.

Watch video highlights of Robertson and the IceDogs against the Wolves, Colts, and Battalion.

Also considered for the award this week was top OHL goal scorer and second overall point getter Justin Brazeau who finished his regular season with six goals and five assists for 11 points in his last four games, and Calgary Flames prospect Adam Ruzicka of the Sudbury Wolves who scored six goals with two assists for eight points in three games.  In goal, Los Angeles Kings prospect Matthew Villalta of the Sault Ste. Marie Greyhounds posted a 2-0-0-0 record stopping 53 shots for a goals-against-average of 1.20 and save percentage of .964.