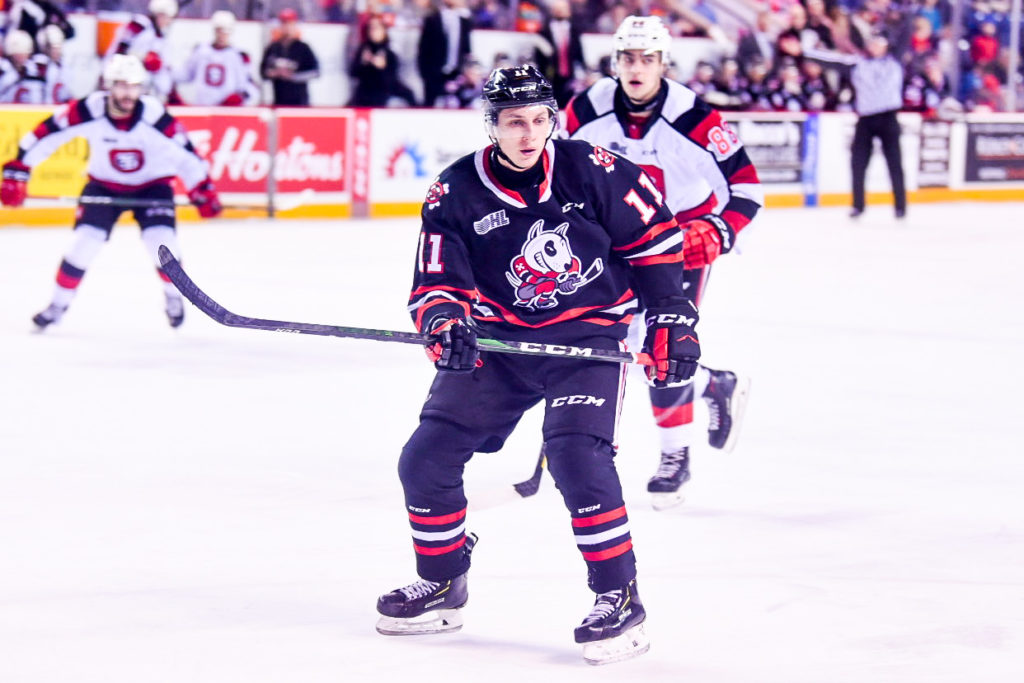 Selected by the Niagara IceDogs in the fourth round of the 2018 Priority Selection, a moment Jonah De Simone calls one of the most important in his life, made even more special because his grandfather, Settimio “Sam”, was close by. Grandson and grandfather embraced right after De Simone’s name appeared on the online draft board.

This past June, Jonah lost his grandfather, to prostate cancer, following a 15-year battle. This November, he wants to support those battling the disease and increase awareness for men’s health, in his memory, through a Movember campaign.

“He was a pivotal person in my life and he’ll be missed, but I want to make sure I am not letting his impact on the world go unnoticed,” De Simone said.

Jonah has many fond memories of his grandfather, in particular, the time spent together, picking out suits for the upcoming season or visits to the Keg Steak House in Niagara Falls with then fellow IceDogs’ rookies Lleyton Moore, and Jake Uberti.

“He was always involved in my life. He would always say that we were always welcome to come by and talk about anything with him, which was really special,” De Simone recalled. “Our relationship grew as I got older, I have learned a lot from him. I look up to the type of person he was. He was always supportive of me. He wanted to see every single goal and interview I had, that was something special we shared.”

Described as a problem solver, and astute businessman, Sam De Simone never stop fighting his diagnosis, using his strengths to help  encourage others as an executive member of Prostate Cancer Canada — Newmarket.

“My grandfather was one of the most caring, kindest people anyone has ever met. He never went down without a fight, right to the very end.”

Jonah, inspired by his grandfather’s example and the way that the IceDogs work to positively impact the Niagara Region.

“I really appreciate the opportunities the IceDogs give their players to interact with the community. It definitely gives you a lot of perspectives seeing the different people who are fans of the team, and what’s going on in their lives and hopefully making it better by giving them a positive experience.

“It’s really meaningful. Not many people get the opportunity to make a person’s day as we do, so I always try to make sure the fans feel like they’ve gotten to know me and I’ve made the most of their time. Playing in the OHL you have a lot of opportunities obviously on the ice, but off the ice, I have the opportunity to make an impact that otherwise kids my age wouldn’t. I definitely want to make sure that I take full advantage of everything I can to help raise awareness to prevent prostate cancer,” he said.

The organization’s involvement with the Canadian Cancer Society has also been extremely important for the De Simone family.

“It means the world to my family to have this campaign for him, the loss that this has caused our family can’t be understated, but I’m committed to kind of making the most out of it and using the platform that I have to raise awareness to help eradicate this awful disease,” De Simone commented.

In facing this challenge Jonah has his family, his team, and his community on side.