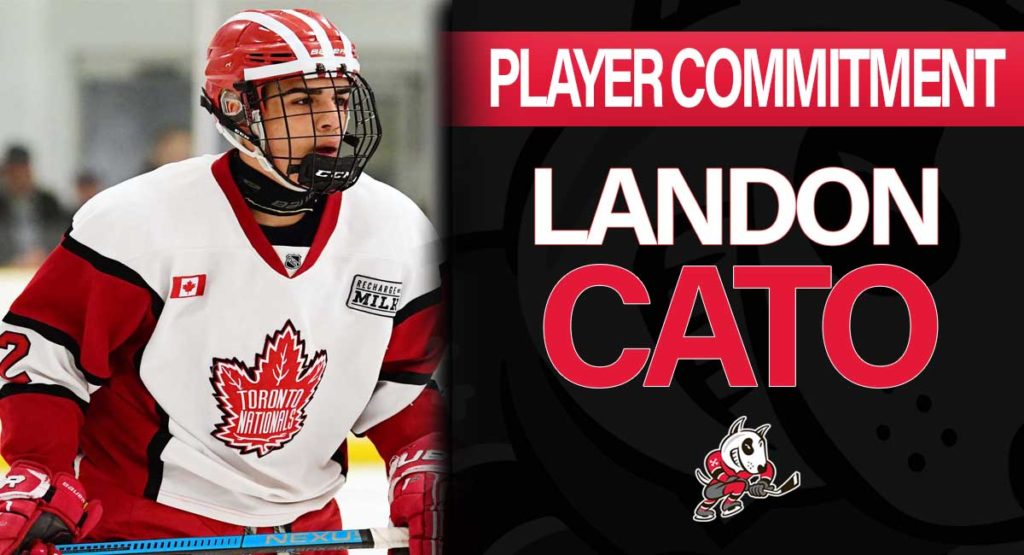 Niagara, ON – Niagara IceDogs General Manager Joey Burke has announced that 2019 third-round OHL Priority Selection pick Landon Cato has signed a Standard Player Agreement, committing to the team. The 6’2″ defenseman played the 2018-2019 season with the GTHL’s Toronto Nationals. Cato was previously verbally committed to play at the University of Massachusetts Amherst, beginning the 2021-2022 season.

Known for his skating and agility, Cato’s speed is what sets him apart from many other defenders of his size, 180lbs. Cato plays a two-way defensive style that will compliment the IceDogs’ tendency to activate defence in the offensive zone. He has been characterized as an “intimidating” defenseman because of his ability to contribute offensively while being reliable in his own zone.

“This is a very exciting signing! Landon is one of the most physically OHL ready players in his draft year, that I have ever scouted. Landon combines his strength and size with power and grit. He plays a mean, shut down game and is very hard to beat. He hits with impact, has an absolute cannon from the point, and is very smooth with the puck on his stick. This is a guy who does everything well, and who is going to fit in great here. I could not be more thrilled to make this signing official. ”

Cato, who will be representing Team GTHL Blue at the upcoming OHL Gold Cup, said “I am extremely excited to join the Niagara IceDogs and am looking forward to being a major contributor to the teams future success”.