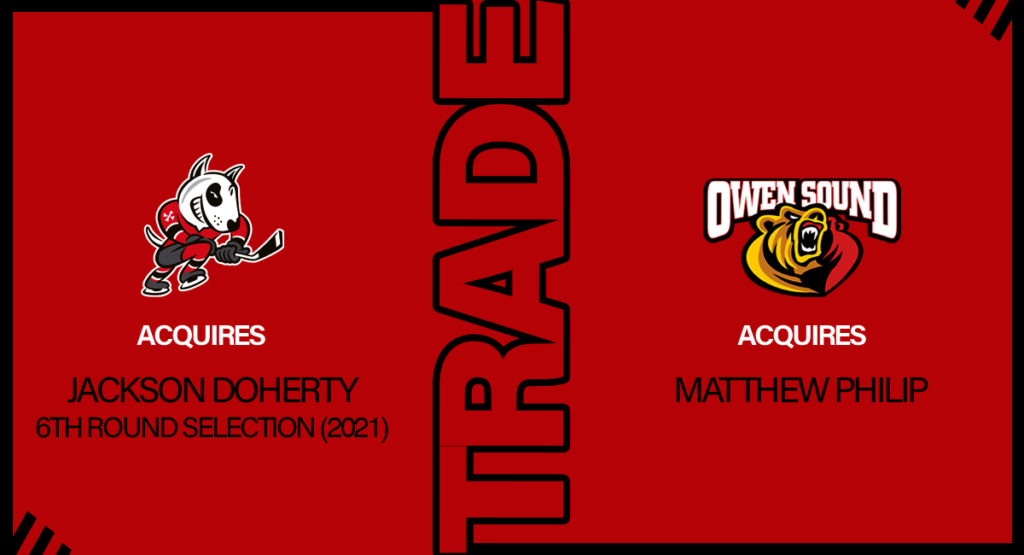 Niagara, ON – The Niagara IceDogs have announced that Jackson Doherty and a 6th round selection in 2021 have been acquired from the Owen Sound Attack, in exchange for over-age forward Matthew Philip.

Philip, who was a selection by the IceDogs in the 2015 OHL Priority Selection and played the last 3 seasons in Niagara, quickly became a fan favourite on and off the ice. “It is always difficult to trade someone who has been a big part of your organization for as many years as Matt has.” said General Manager Joey Burke. “The bottom line is with the amount of over-age players we currently have on roster, something had to be done and while it is difficult to see Matt go, I believe he will fit in great with Owen Sound. I wish him nothing but the best!”

The 18 year-old forward from Ancaster, ON., has played the past 2 seasons with the Attack. In 66 games last season, Doherty collected 13 points (6 goals, 7 assists).

Described as a reliable two-way forward, Doherty brings an offensive upside to his game. He was drafted 43rd overall in the 2016 OHL Priority Selection by the Attack. “We are thrilled to be adding Jackson to the IceDogs family today as well as an important draft pick in a big year for us.” said Burke. “This is a guy who I was a huge fan of way back in his minor midget days in Hamilton, and he has continued to take strides in his game over the past few seasons in Owen Sound. Jackson is a local guy who brings an unbelievable work ethic on the ice who we believe we thrive with a bit more opportunity here in Niagara. Jackson is extremely high character. I believe he will fit in well with our group here.”