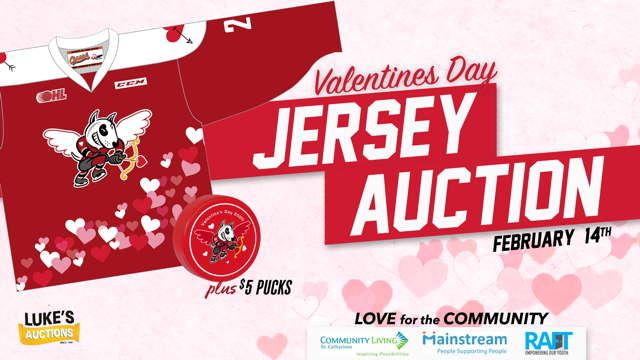 On Friday, February 14th, the Niagara IceDogs are hosting the Hamilton Bulldogs, in just their second home game on Valentine’s Day since moving to Niagara to start the 2007-2008 season.

Friday’s game will be the first year the IceDogs have worn a specialty jersey, to commemorate the night. The red and white jerseys feature Bones as Cupid, with trailing hearts. The jerseys will be auctioned live post-game with the help of Luke Pasmore and his staff from Luke’s Auctions, who generously donate their time.

In addition to the game worn jerseys that will be auctioned live post-game, commemorative mystery pucks will also be sold on the concourse for $5.00 on Feburary 14th.  Every puck will be signed by a member of the IceDogs in black, however select mystery pucks will be signed in silver. Anyone who selects a silver puck will win a prize to be redeemed at the jersey raffle table. All the proceeds benefitting three local organizations, Mainstream Niagara, Community Living St. Catharines and The RAFT, equally.

The cost of jersey production is covered by the IceDogs, to allow for 100% of the funds raised to be donated to the three organizations. Although Valentine’s Day is typically thought of as a romantic holiday, the IceDogs are putting their own spin on things this year. The Niagara community and IceDogs fanbase continually show their love and support for the team. This year, the IceDogs are taking the opportunity to show their love for organizations who support so many in the Niagara community.

Mainstream Niagara and Community Living St. Catharines are focused on providing resources to those in our community with intellectual or developmental differences through supportive environments. The RAFT strives to provide Niagara’s at-risk youth with services and programs to help them develop into independent and self-sufficient individuals.

The Niagara IceDogs are fortunate to have several individuals who access the services provided through these organizations attend games, as an occasional fan and as season ticket holders. In addition, the Niagara Jr. IceDogs, a hockey program for those with special needs to learn and enjoy the game, are sponsored by the Niagara IceDogs. Members of the Jr. IceDogs access the services provided by Mainstream Niagara and Community Living St. Catharines, and will be in attendance for the game. Members of the Niagara Jr. IceDogs will also be dropping the ceremonial puck prior to the game against the Bulldogs.

Through this game, and game night fundraising initiatives, the IceDogs want to show their passion for helping to provide additional resources to such necessary causes in the Niagara Region, and give back to valued members of the community.