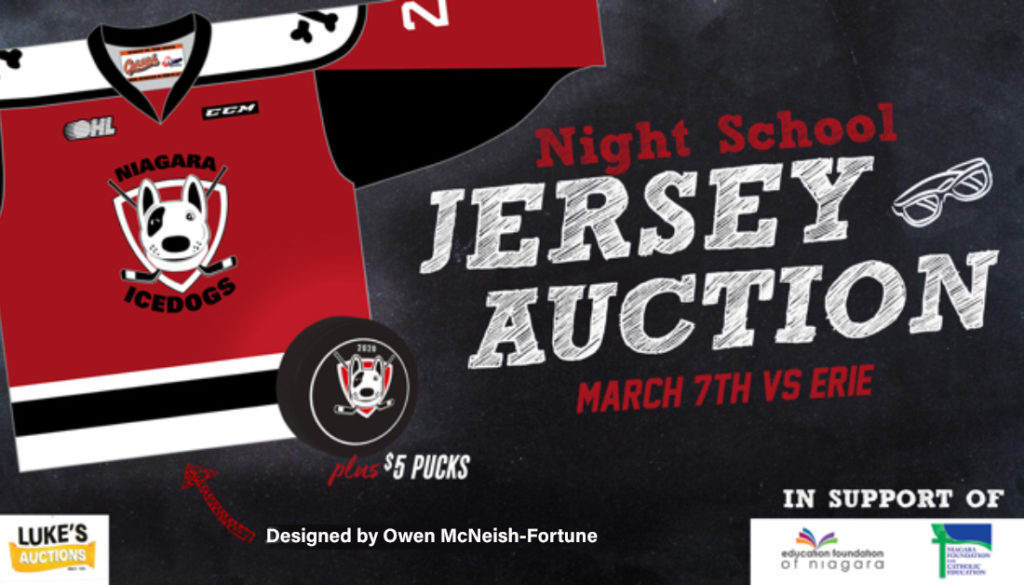 Niagara, ON – The Niagara IceDogs are excited to announce the “Night School” specialty jersey, to be worn on March 7th against the Erie Otters, was designed by Owen McNeish-Fortune.

Owen is a 13 year-old eighth grade student at Richmond Street Public School, in Thorold, ON. Richmond Street Public School is one of upwards to 70 schools the Niagara IceDogs visit each season. Several schools were involved in encouraging their students to participate in the design contest. “My teacher was just like ‘Owen, would you like to sign up for a jersey designing competition’ and I was so excited.” said McNeish-Fortune. “The IceDogs are my hometown team, so it was perfect.”

Owen has been an iceDogs fan for a long time, and would attend games with his father. “My dad took me to games, especially at the Jack Gatecliff [arena], and I loved the team. Josh Ho-Sang, Brendan Perlini, Dougie Hamilton – they were my favourite players. They’re all really fun to watch”.

The IceDogs, who will usually wear four specialty jerseys per year, have never worn one designed by a student. “We thought it would be a neat idea to include students from the Niagara Region, because we have such great relationships with the school boards. We attend upwards of 70 schools each season, and we thought what better way to involve them than to tie it in to a game night.” Said Niagara IceDogs Director of Ticket Sales, Brianne Whitty.

The design selection was a tough process, going through over 200 designs. “We said that the designs should include our colours but to make it unique by including your favourite things about the IceDogs, hockey, or the Niagara Region. Ultimately, as a collective, we decided upon Owen’s design” said Whitty. Owen’s design, inspired by the Mighty Ducks logo in the movies, was intended to “make the IceDogs jersey look more fun”. “With Owen’s design, we liked the layout of the colours, with the cross bones on the shoulders and crossed sticks on a shield and Bones facing forward. We’ve never had a front view of Bones on a jersey before, and we thought that was a cool concept” continued Whitty.

With over 200 submitted designs, there were several unique concepts that may be featured on an IceDogs jersey in the future. The involvement of the students in the Niagara Region was overwhelming in designing the March 7th jersey, that Whitty did not rule out another design competition for a future game.

As the winner of the jersey design contest, Owen McNeish-Fortune will receive his own jersey, complimentary tickets to the game on March 7th, and will be dropping the ceremonial puck along with representatives from the Education Foundation of Niagara, and the Niagara Foundation for Catholic Education.

As a thank-you to all who submitted a jersey design, the Niagara IceDogs will be issuing a pair of ticket vouchers, eligible to be redeemed for any game in the 2020-2021 season.

Are you 13 years old or younger, and want to be a part of our Night School game? Click here for fun game night opportunities.