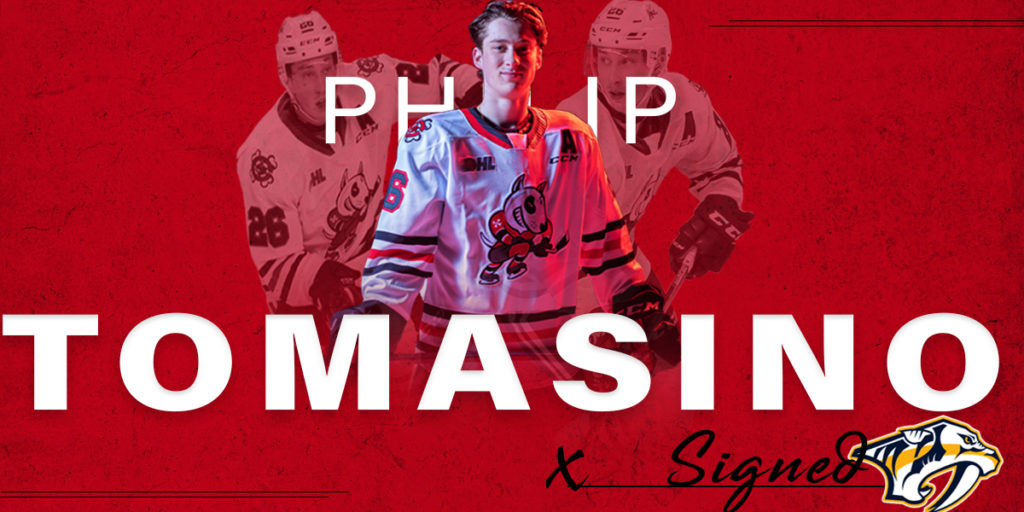 Niagara, ON- The Nashville Predators announced today they have signed 2019 first round selection, Philip Tomasino, to a three-year NHL Entry Level Contract

Drafted in the 1st Round (24th overall) in the 2019 NHL Entry Draft, the 6’0, 180-pound forward attended the Predators’ development camp following the draft. Tomasino was invited to training camp, and got into pre-season action in September before being returned to the IceDogs prior to the start of the 2019-20 regular season.

The Mississauga, ON native, is currently in his third season with the IceDogs, and is on pace to have a career year. He is first in team scoring, with 23 points in 12 games (9 goals, 14 assists). Tomasino ranks fourth in Ontario Hockey League scoring, 9th in power play assists (9), and second in shorthanded goals scored (2).

He was named an Alternate Captain in September 2019.

Tomasino has appeared on the international stage twice in his junior career, representing Canada at the 2017 U17 Hockey Challenge, and the 2019 U18 World Hockey Championship. He was invited to participate in Hockey Canada’s Summer Development Camp in preparation for the 2020 World Junior Hockey Championship, and recently was named to the roster of both Ontario games for the 2020 CIBC Canada Russia Series.