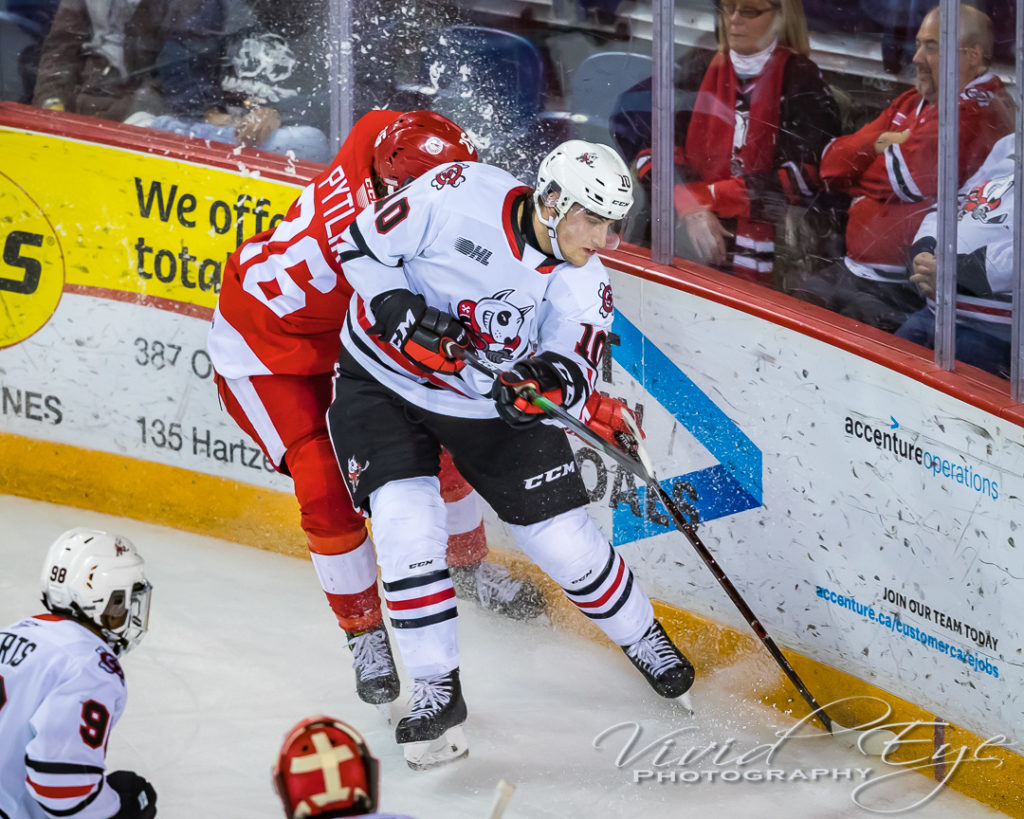 The IceDogs hit the road for a weekend trip north to visit the Soo Greyhounds. In the second, and final, game of the season against Sault Ste. Marie, the IceDogs were looking to even out the series with a win.

The IceDogs were without Captain Ivan Lodnia, Cam Peters, and Giancarlo Chanton (illness). Christian Sbaraglia got the start in net.

The IceDogs won 9/14 face offs within the first 14 minutes of the game. While defending the tail end of a penalty, Dakota Betts rang a shot off the post shorthanded. The Greyhounds came back to take the 1-0 lead. Jake Uberti and Jackson Doherty had two excellent scoring opportunities in the second half of the period, but were able to get the puck into the back of the net. The Greyhounds scored once more before the end of the period.

Seven minutes into the second period, the IceDogs cut the Soo lead in half off a tic-tac-toe play. Cameron Butler, who carried the puck into the zone passed it to Castleman. His drop pass for Bruder was shot right into the net!

The Greyhounds added three more in the second period to carry a 5-1 lead. The ‘Dogs continued to be strong in the face off circle in the middle frame, winning 58% of the draws through 40 minutes.

Andrew MacLean started the third period in net. The night just wasn’t meant to be the Dogs’. When Niagara would get a good scoring chance, but couldn’t convert, the Soo would come back and score. In the dying minutes of the game, second year forward Jonah De Simone showed some bite, and giving the young ‘Dogs a positive to build on. He picked up a loose puck and rushed it into the offensive zone. He was able to get a shot off, but couldn’t beat the goaltender.

Jonah De Simone pounced on a loose puck and got a good scoring opportunity late in the third! #IceDogs pic.twitter.com/w9OJDXcVnd

The Greyhounds took the game 10-1.

The IceDogs are home at the Meridian Centre on Thursday, February 13th to take on the Barrie Colts! Tickets are starting as low as $15/person and can be purchased online HERE, or in person at the following locations: