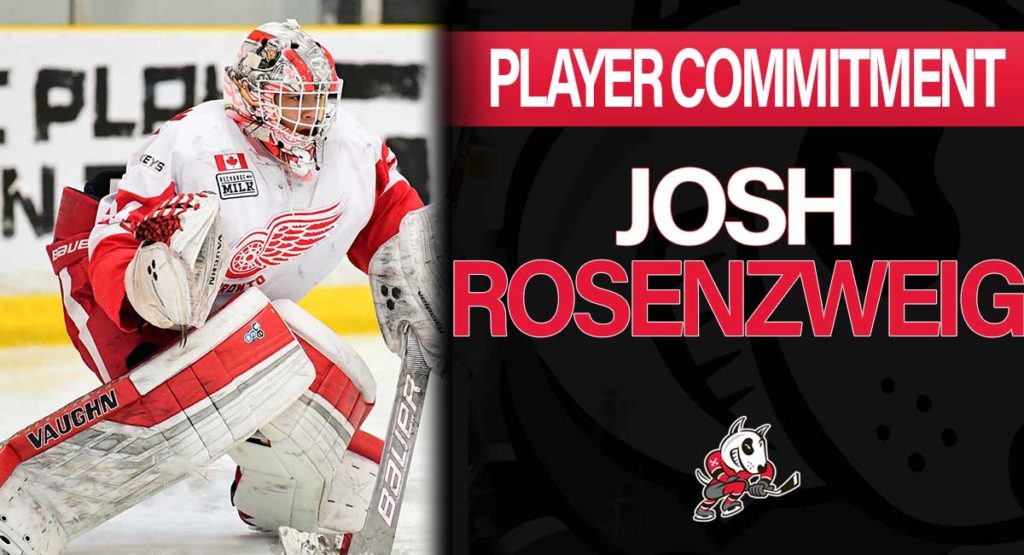 Niagara, ON – Niagara IceDogs General Manager Joey Burke has announced that 2019 sixth-round OHL Priority Selection pick Josh Rosenzweig has signed a Standard Player Agreement, committing to the team. The 6’0″ goaltender played the 2018-2019 season with the Toronto Red Wings MM AAA of the GTHL.

Posting a 2.44 goals against average and.883 save percentage with the Toronto Red Wings at the OHL Cup, Rosenzweig was considered one of the GTHL’s top goaltenders last season. He uses his athleticism to make highlight-reel level saves, and steal games for his team. As an aggressive goaltender, he moves quickly from post to post while maintaining his composure. He is known for having a strong glove side, which helped him lead the Red Wings to the OHL Cup final.

Josh Rosenzweig is considered by Prospect Pipeline to be a potential steal for the IceDogs at 119th overall.

General Manager Burke proudly announced the signing this afternoon. “I am thrilled to be able to have Josh sign today. This is a guy who was at the top of our goalie list all season long and we couldn’t believe we were able to draft him where we did. To be a winning team in this league, you need high-end goaltending. With this signing we have added even more young goalie depth to our group. Josh has a bright future with us and I couldn’t be happier to make this signing official!

Rosenzweig recently represented team GTHL Red at the OHL Gold Cup, where his team finished second, recording a shutout in the tournament. “I am so honoured and proud to have officially signed with the Niagara IceDogs. This is an awesome moment and a surreal experience. A special thanks to my family and all the people who have helped me get this far. The work starts now.”

Hockey Canada announced this afternoon that Rosenzweig is one of 12 U17 goalies invited to participate in the Program of Excellence’s Goaltending Camp, taking place in Calgary this week.