Sopa’s Offence, and Tynan’s Glove Propel IceDogs to 2nd Win of the Season 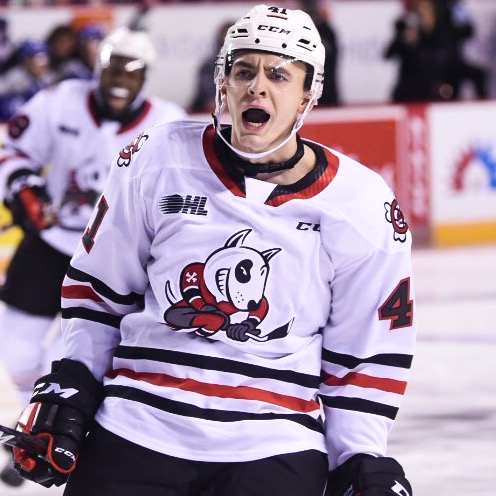 The Niagara IceDogs opened their road schedule tonight in Mississauga, to take on Central Division foes the Steelheads. Facing two former IceDogs, Hayden Davis and Liam Ham, the ‘Dogs were hungry to continue the success they experienced last night in the Meridian Centre opener.

The ‘Dogs got the scoring started early for the second consecutive game, and it was the same guy capitalizing. Kyen Sopa opened the scoring 23 seconds into the game, cashing in on a feed from Phil Tomasino, who had drawn the attention of the Steelheads’ defencemen and goaltender. Sopa had the open net to tap in the puck. The Steelheads tied the game at 1, but just 40 seconds later, Jonah De Simone showed the kids in attendance why you listen to your coach when they tell you to keep skating. Chasing down a puck for an icing call, De Simone capitalized into an open net after the Mississauga netminder bounced the puck off the goal post and straight onto his stick.

The second period began with the IceDogs holding a 2-1 lead. Although the Steelheads came out firing on all cylinders on goal, Tucker Tynan stood tall making big saves to give the ‘Dogs the the defensive boost they needed. After Tynan made a huge save with six minutes remaining in the period, the line of Tomasino, Castleman and Sopa went blazing into the offensive zone. Although they were stopped on the initial scoring chance, Castleman found a wide open Sopa who made no mistake and found the back of the net for his second goal of the night. The ‘Dogs carried the 3-1 lead into the third lead.

The ‘Dogs defence shone in the third period, as they nursed the lead. Tucker Tynan made the Steelheads see orange, flashing his glove to complete the 38-save win.

The IceDogs finish their first weekend of the 2019-20 season with two wins under their belt!

The IceDogs return home next Thursday, October 10th, to the visiting Oshawa Generals. Tickets are starting as low as $10/person and can be purchased online HERE, or in person at the following locations: