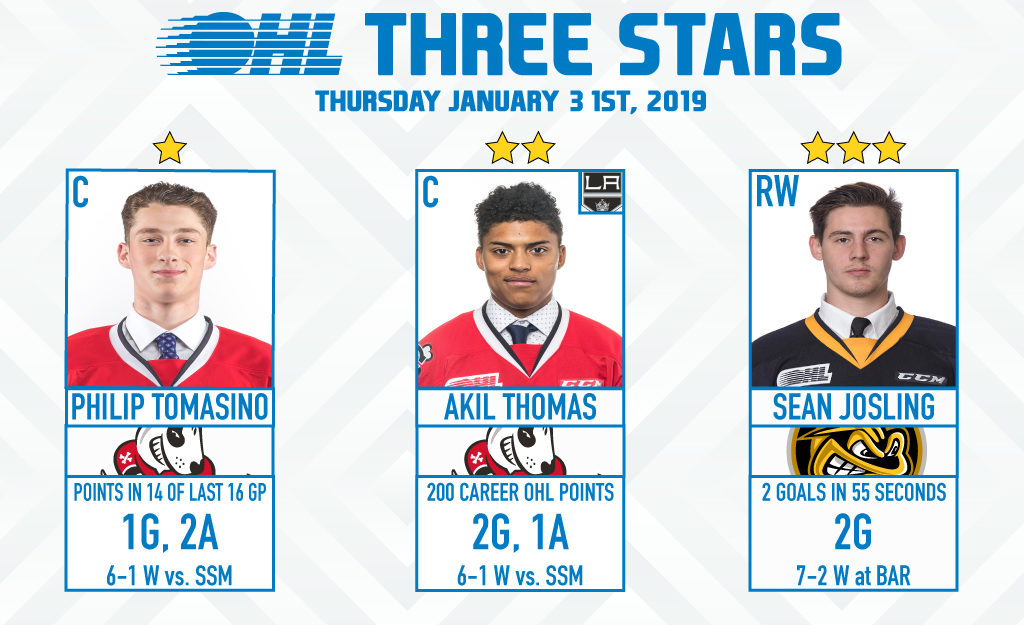 1ST STAR: PHILIP TOMASINO (NIAGARA ICEDOGS):
NHL Draft prospect Philip Tomasino had a productive night on Thursday, recording a goal and two assists as the Niagara IceDogs took down the West Division leading Soo Greyhounds 6-1 on home ice. The sophomore forward netted his 25th goal of the season on a hard wrister midway through the second period to put Niagara up 2-1. He followed that up by pitching in with primary assists on goals from Oliver Castleman and Jason Robertson. Tomasino has 52 points (25-27–52) over 47 games this season along with a plus/minus rating of plus-25. The 17-year-old from Mississauga, Ont. has now scored in three straight contests. Tomasino recently represented Team Orr at the 2019 Sherwin-Williams CHL/NHL Top Prospects Game.
• GAME HIGHLIGHTS

2ND STAR: AKIL THOMAS (NIAGARA ICEDOGS):
Los Angeles Kings prospect Akil Thomas picked up a pair of goals and an assist in Thursday’s 6-1 win over the Sault Ste. Marie Greyhounds. Niagara’s seventh straight win saw Thomas light the lamp in the first and third periods while chipping in with an assist on Ben Jones’ 29th goal of the season. Thomas’ three-point effort was his fifth game in the month of January with three points or more. The 18-year-old from Brandon, Fla. has points in nine of his last 10 games and a total of 71 (26-45–71) through 43 games this season. Thomas rounded out Thursday’s game by recording his 200th career OHL point. The Toronto Marlboros Minor Midget graduate was Los Angeles’ second round pick last summer.
• GAME HIGHLIGHTS

3RD STAR: SEAN JOSLING (SARNIA STING):
Sarnia Sting veteran Sean Josling scored twice in a span of 55 seconds on Thursday as the Sarnia Sting poured it on, defeating the Barrie Colts 7-2 on the road. Josling’s 12th and 13th goals of the season helped him break a nine-game scoring drought as he increased his totals to 37 points (13-24–37) through 45 games on the campaign. A third-year veteran from Toronto, Ont., Josling was originally a free agent signing by the Sting prior to the 2016-17 season. Josling is a former Telus Cup champion as a member of the North York Rangers Midget AAA team in 2016.
• GAME HIGHLIGHTS