Uberti Making the Most of the Extended Off-Season Training 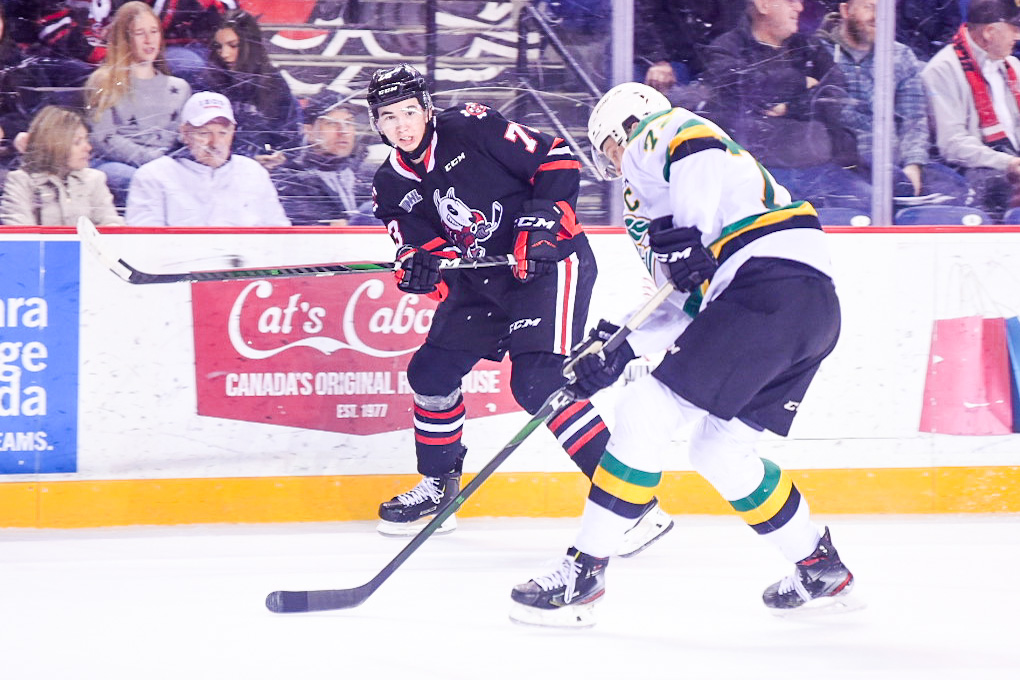 Niagara IceDogs’ centre  Jake Uberti (02) has not been idle during his extended off-season. Instead, he has been taking his training and conditioning to the next level under the direction of NHL veteran and Stanley Cup champion, Gary Roberts.

“He’s been awesome,” Uberti commented. “They take care of me really well. They treat us like professionals. It’s a great group of people and they’ve been helping me obtain my goals, and prepare for next season.”

Uberti has also been training alongside some of the game’s top stars at Roberts’ state-of-the-art facility in North York, which is something he calls an “unbelievable experience”.

“I’ve had the privilege of working out with some pros and getting to see Connor McDavid workout. Just watching them and seeing their work ethic, and the dedication they have to the game is huge. Hopefully, I can bring that over to Niagara and show some of the younger guys what I’ve learned, and what it’s like to be a professional,” he continued.

“You start to understand how much of a grind it is when you’re in the gym every day, giving it 110%. Waking up the next morning sore and you still got to give it that 110%. You see Connor McDavid and Darnell Nurse do it like it’s nothing, so it’s just understanding the dedication that they put in and strive for excellence. It’s amazing to see how they take care of their bodies and how they stretch and recover, because you’re not going to be able to give it you’re all in the gym and then go home and sit on the couch and eat bad and then be able to do it the next day and for the weeks to come. How they take care of their body, what they’re eating, and Gary Roberts has been really good with that. They give us food that’s really good for us, for recovery. Their commitment to being great every second of the day is amazing.”

Uberti is looking forward to the 2020-2021 OHL season to see the improvement in his performance and endurance.

“A huge aspect of the offseason for me was staying in good health, getting quicker, and maintaining the bodyweight I’m at now. I’m dedicating five hours a day to preparing for the season, and I find that works for me. I’m just excited to see how I feel during the season. During the grind of it. I’ve been working out, adding different elements and different workouts.”

Excited to showcase what he’s learned both on and off the ice, while working on his fitness, the mature 18-year-old most wants is to hone his leadership skills this season.

“I definitely want to be a better leader,” Uberti said. “I feel like I’ve definitely worked on my individual skills during the off-season, but during the season I want to bring a winning attitude to the locker room. We want to be winners. It’s just a matter of teaching the younger guys, and really remembering how to win after a tough season last year.”

When IceDogs’ fans welcome the return of hockey to Niagara. They will also anticipate Uberti’s expanded role on a team eager to improve on its 2019-2020 season.

“I’ve been itching to get back. I’m really excited about the group we have. I just miss being around the guys, in general, it’s like a family in Niagara – from the coaching staff to all the people who work behind the scenes. We stopped abruptly and I didn’t really get to say goodbye, so I’m looking forward to seeing all of them again, and getting back to work.”

Uberti, the organization’s 4th round pick in the 2018 Priority Selection (72nd overall) tripled his rookie point totals in his sophomore season, in two fewer appearances. His 17 goals and 33 points ranked third in team scoring. The 6-foot-1, 185-pound, native of Toronto, Ontario is rated 147th by Central Scouting for the 2020 NHL Entry Draft.

The draft which was originally scheduled for June 26-27 in Montreal, has since been postponed until October 6-7, due to the novel Coronavirus.