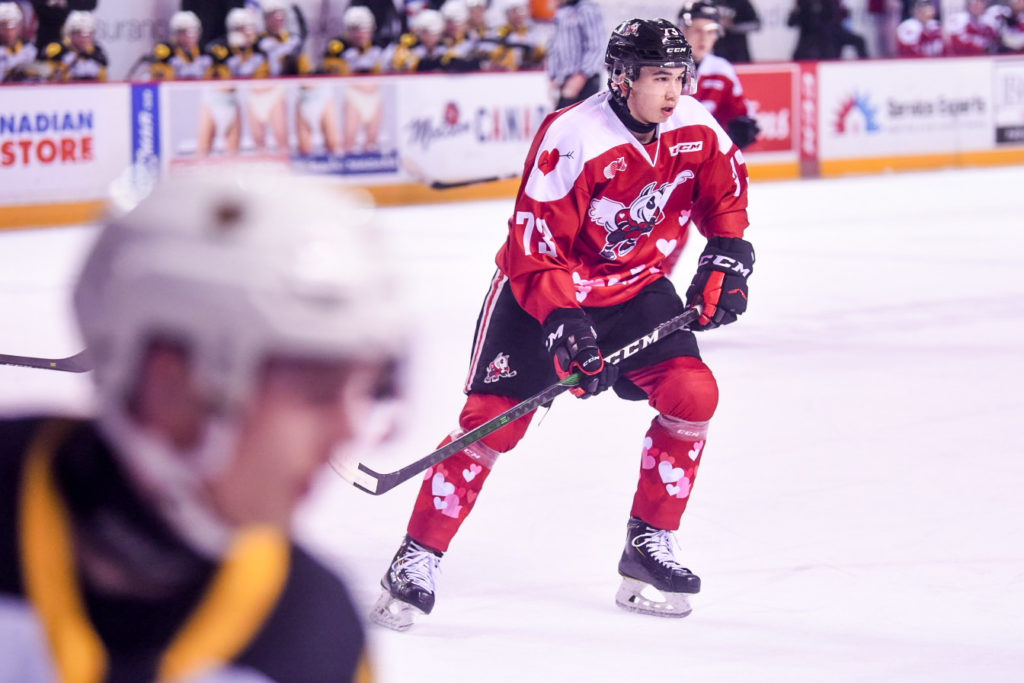 Tonight, the Niagara IceDogs took on the Hamilton Bulldogs in front of a sold out crowd at the Meridian Centre on Valentine’s Day.

It only took 42 seconds for the IceDogs to get on the scoreboard. Ivan Lodnia is showing no signs of missing a stride in his recent return to the ‘Dogs lineup as he scored his 23rd of the season. Assists go to Oliver Castleman and Andrew Bruder.

.@ivan_lodnia isn’t missing a stride in his recent return to the lineup #IceDogs | #mnwild pic.twitter.com/yKeLo9fFtS

On the IceDogs’ second man-advantage opportunity of the night, they made no mistake, extending their lead to two. Lodnia let a wrister go from the left circle where Castleman got a piece of it before Jake Uberti put it into the back of the Bulldogs net.

Hamilton responded with two of their own to tie the game up going into the first intermission.

In the second period, goaltender Andrew MacLean stood on his head, making two miraculous saves on the penalty kill to keep the game tied up at two.

“Your best player on the pk has to be your goalie.”

Unfortunately, the Bulldogs eventually scored to take the lead, 3-2. The IceDogs answered back with 1:42 remaining in the second as Jake Uberti carried the puck into the offensive zone and picked short side top corner. This was Uberti’s first multi-goal OHL game.

UBERTI’S SECOND OF THE NIGHT TIES US UP

The third period only saw only two goals — courtesy of the Hamilton Bulldogs. The IceDogs continue to put up a solid number of shots on net (35) and dominated in the faceoff dot, winning 55%. Rookie Ethan Sims was an impressive 56% in the dot and Cameron Butler was 63%.

The IceDogs held a live auction post-game for their Valentine’s Day specialty jerseys; the proceeds will be donated to Mainstream Niagara, Community Living ST. Catharines, and RAFT. Stay tuned for the final donation amount.

The IceDogs are back in action on Sunday, February 16th at the Meridian Center against the Sudbury Wolves. Tickets are starting as low as $15/person and can be purchased online HERE, or in person at the following locations: