Tonight, the Niagara IceDogs are facing off against their QEW rivals, the Hamilton Bulldogs in their second night of back-to-back games. This is the last time that these two teams will see each other in the regular season. Currently, the Bulldogs are leading the season series 3-2, but tonight the IceDogs are gunning to tie the series up.

Hamilton native, Isaac Nurse, is scoring at a rate of 0.82 points per game this season. Although he has only played 22 games, Nurse has an astonishing 67 shots on net.  The Bulldogs are also home to forward, Arthur Kaliyev, who has 37 goals and 79 points. Kaliyev’s 13 power play goals on the season are a warning for the IceDogs to stay out of the penalty box.

The last time these two teams took the ice, Elijah Roberts tallied two goals and one assist. This bumped Roberts’ point total on the season to 15, in 35 games played. Roberts’ impressive offensive ability is seen through his 66 shots on net, and confidence carrying the puck into the offensive zone.

Tonight’s game will include Valentine’s Day specialty jerseys that will be live auctioned off post-game. The proceeds will be donated to Mainstream Niagara, Community Living ST. Catharines, and RAFT. Commemorative mystery pucks will also be sold on the concourse; any puck purchased that was signed by an IceDogs player in silver will be redeemable for a prize. 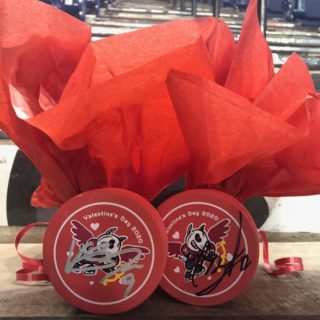